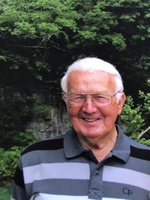 William “Bill “ Oscar Fairley , age 88, of Cave Springs, died Friday November 13th, 2020. He was born
January 7, 1932 in Springdale, Arkansas to Drury and Frances Fairley. At the age of 16, he left Arkansas and headed west to work. Star Ranch of California was one of them. He also was a truck driver. He met mom (Jean O’Brien of Rice Lake, Wisconsin) while working at Kerr Glass Factory. We moved to Arkansas in 1975 and been here ever since. Mom and Dad celebrated 69 years together. Bill is proceeded in death by his parents, four brothers and two sisters. Bill is survived by his wife and their three children, Rick and wife Nancy Fairley of La Center, WA. , Mike Fairley and his wife Wendy of Dallas, TX. , Francie and Mike Catron of Gentry, AR; and seven grandchildren. sisters, Rosa Lea Davis and husband George of Springdale, Nancy Wirz and husband Denny of Farmington; and brother Wayne Fairley of Fayetteville.


Bill earned many titles - “Honey”, as Jean referred to him, Grandpa or Grumps (ha), brother, Uncle Bill, Bill and Jean to many friends and neighbors. He served in the Navy. His knowledge and love of nature was mind blowing. He was the “phone a friend” for anything regarding plants, hummingbirds, animals, just about everything under the sun. He was an encyclopedia in itself. He was always reading and learning. He was a perfectionist with a magazine picture perfect garden or yard. No place in NWA reveled in beauty like his place for 44 years. He would get up everyday eat breakfast and work digging, planting, and trimming. Family vacations he would anxiously plan camping in the mountains of Northern California to Canada or Worlds Fair in Knoxville, TN and much in between. His favorite was here local in Jasper, AR.
At the end of Bill's life journey, his health failing and physical body deteriorating , he captured the hearts of his caregivers at Siloam Springs Rehab as they claimed him and mom as their own.
Whether sitting on the porch or eating a meal in his sunlit dining room, and hearing stories of his life-he will be greatly missed.

A private memorial service will be scheduled at later date.