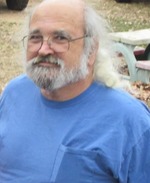 Steven Patton , age 64, was born June 15, 1956 in Gravette, AR. to Charlie Holt Patton and Marian Pearl Green Patton. Departed this life January 27, 2021 at his home in Westville, Ok. He was preceded in death by his parents and three brothers, Richard (Dick) Patton, Charlie Patton and Robert (Bob) Patton all of Decatur, AR. He is survived by his wife, Pamela Sue Patton of the home, two sons, James Colston of Stilwell, OK and Donald A Colston of Westville, Ok.` two daughters, Angela Colston of Westville, Ok and Kimberly Craig and husband, Jeffery Craig of Westville, OK. Fifteen grandchildren, ten great grandchildren and many other friends and relatives. Steve was a very loving, giving person, he would do anything for his grandchildren, they were the pride and joy of his life, he was so proud of each and everyone of them. He loved his little dogs and cat, and spending time playing with them. He also enjoyed going to storage auctions. Steve left home at an early age, living with friends and relatives until he was old enough to join the Marines, where he served for four years, after leaving the Marines he worked installing phone cable for several years then became a truck driver. He loved spending time with family and cooking on the grill. Steve will be deeply missed by all his family and friends.