To share your memory on the wall of Som Lab, sign in using one of the following options:

Print
Som Lab, beloved mother and grandmother, peacefully passed away on Friday, September 25 after a three-year hard-fought battle against cancer. She was 69 years old.

Som was born and raised in Sisaket, Thailand and immigrated to the Unite... Read More
Som Lab, beloved mother and grandmother, peacefully passed away on Friday, September 25 after a three-year hard-fought battle against cancer. She was 69 years old.

Som was born and raised in Sisaket, Thailand and immigrated to the United States when she was 25. She became a naturalized US citizen in 1983, and shortly thereafter settled in Myrtle Beach, SC which has been her home for over 30 years.
Som knew her way around the kitchen and had a love for cooking authentic spicy Thai food, as well as baking cakes and desserts. She was also an avid gardener and could always be found outside tending to her flowers and plants.

Survivors include two daughters, Danielle Eggerling (Chad Cox) of Myrtle Beach, SC, Tia Greaser (Chuck), of Bentonville, AR and five grandchildren, Savanna, Blake, Noah, Gavin and Mila, as well as sister-in-law Lori Summers of Myrtle Beach, SC. She also had many loving friends and neighbors whom she considered family.
A Celebration of Life will be held in Myrtle Beach, SC on November 28 at Angelo’s Steak and Pasta, where she had been employed for over 20 years.
Read Less

To plant a memorial tree in honor of Som Lab, please visit our Heartfelt Sympathies Store.

Receive notifications about information and event scheduling for Som Lab

There are no events scheduled. You can still show your support by sending flowers directly to the family, or planting a memorial tree in memory of Som Lab.
Plant a Tree

We encourage you to share your most beloved memories of Som Lab here, so that the family and other loved ones can always see it. You can upload cherished photographs, or share your favorite stories, and can even comment on those shared by others.

Posted Oct 01, 2020 at 06:33pm
Some of my fondest memories with my dear friend is when we were just hanging out sipping on tea or enjoying a glass of wine. Som loved to tell stories and laugh! We always had a relaxing fun time together :)
Som was a good listener too and was always there for me! You were truly blessed to call her friend. Her kind deeds were endless. It was not unlike her to show up at my door with a bag of figs, some warm bread or mint from her yard. She was always being thoughtful!
I will miss my friend very much and always be thankful for our friendship and the memories we made♡

Posted Sep 29, 2020 at 06:43pm
She’s always been my favorite aunt. I have so many memories with her. Her banana nut bread was by far my favorite. She also made a cake for me for my sweet 16. She loved everyone. Never met a stranger. She loved my little girl too. I miss her.
Comment Share
Share via: 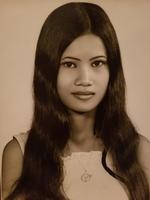