To share your memory on the wall of Patricia Brandkamp, sign in using one of the following options:

She volunteered with many organizations over the years and especially loved the theater. She appeared in numerous productions at the Arts Center of the Ozarks as well as two movies. She was a devoted supporter of missions. Her hobbies were reading, needlework and stained glass. She enjoyed fishing, camping, traveling, skiing, and Christian studies.

She is survived by her dear friend Steven Jones and her brothers, Samuel “Sam” Stewart (Nancy) and Dr. Robert “Bob” Stewart (Stephanie) both of New Braunfels, Texas and William “Bill” Stewart (Judi) of Savannah Georgia.

She is also survived by her daughter Beckwith Campbell (Brian Zamzow) of Springdale, and her sons David Brandkamp of Springdale and Spencer Brandkamp (Lanelle) of Rogers.

All family and friends are invited to gather for a graveside memorial at Baptist Ford Cemetery in Greenland, Arkansas on Saturday, October 17, 2020 at 2:00 p.m. Masks and social distancing is requested.

Receive notifications about information and event scheduling for Patricia

There are no events scheduled. You can still show your support by sending flowers directly to the family, or planting a memorial tree in memory of Patricia Stewart Brandkamp.
Plant a Tree

We encourage you to share your most beloved memories of Patricia here, so that the family and other loved ones can always see it. You can upload cherished photographs, or share your favorite stories, and can even comment on those shared by others.

Posted Oct 01, 2020 at 04:00pm
Patricia was a beautiful woman on the inside and the outside, who cared deeply for people. Our heartfelt condolences go out to the family at this time. We pray for peace and comfort to surround and uphold you.
Comment Share
Share via: 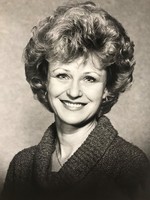