Obituary for Nona May McClain 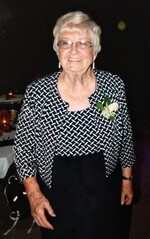 Nona May McClain, 88, of Springdale, Arkansas, passed away on January 16, 2021 after a lengthy battle with Parkinson’s disease. Nona was born on January 14, 1933 to Birdie Mae and William Jones in Horatio, Arkansas. She and her family moved to Chandler, Arizona when she was 11 years old. At the age of 19, she moved to Williams, Arizona where she and her husband, Lloyd W. Racher managed a variety store and later an insurance company. She and Lloyd had four children.
Later in 1965 she married James D. McClain and together they had a son. She remained in Williams until 2005 when she moved to Northwestern Arkansas to be near family. Some of Nona’s favorite activities included golf, board games and cards. She enjoyed watching Dallas Cowboy football games and Arkansas Razorbacks football games. Nona was a very caring, loving, and generous person. She was so loved by her entire family.