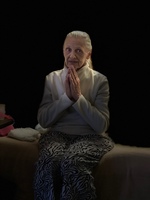 Joanne Althea Rachlen, 80, passed away peacefully in her sleep on Friday, April 30 2021 in Springdale AR.
Joanne was born in Boston, MA in 1940. She was a widely acclaimed professional dancer and toured major cities in the northern United States and Eastern Canada. Her star was about to shine brighter with offers coming in from Hollywood for film appearances, but she chose a more modest lifestyle, opting to stay in Massachusetts and raise a family with the love of her life, Jordan Rachlen, Sr.
Joanne had a passion and kindness for all animals, especially exotic birds. She was also fascinated with ancient Egyptian culture.
Joanne is survived by her 5 children, Martin Peterson, 63, Karen Peterson, 61, Jordan (Donna) Rachlen, 58, Jay Rachlen, 56, and Neil Rachlen, 47. She is also survived by her two grandchildren and three great-grandchildren.