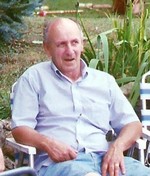 
Jerry loved being a mechanic and working on cars and tractors. He spent several years living on a farm and working as a farmer near Upland, Indiana. He enjoyed cars and had a new one almost yearly. He took pride in a huge collection of model cars, trucks and tractors which he loved.

Funeral services are pending. Burial will be at Gardens of Memory, Marion, Indiana

In lieu of flowers donations can be made to www.nwatailwaggers.org
Online Condolences www.westfieldchapel.com