To share your memory on the wall of Jeffery Ford, sign in using one of the following options:

Provide comfort for the family of Jeffery Ford with a meaningful gesture of sympathy.

Jeff attended Rogers' public schools. He served in the army and received an honorable medical discharge. Most of Jeff's career was spent as a musician, he traveled extensively and performed in various bands across the United States.
Jeff was preceded in death by his father and an infant sister. He survived by his mother, Rosa Lee Ford; brother Mike Ford of Rogers, Christel Herbert and husband Mike of Rogers; two nieces Savanna Herbert of Rogers, Michelle McMaster and husband Chance of Lowell, his faithful dog (Bear), many cousins, aunts, and uncles. A special thank you and appreciation to our cousin (Robert Schneider of Florida) for his help in making Jeff's final days memorable.
A graveside service will be held on November 2, 2019, at 2:00 pm, at the Rogers City Cemetery. For additional information, please contact Rosa Lee Ford at 479-202-2027.
Read Less

We encourage you to share your most beloved memories of Jeffery here, so that the family and other loved ones can always see it. You can upload cherished photographs, or share your favorite stories, and can even comment on those shared by others. 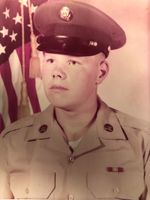