To share your memory on the wall of Jack Gray, sign in using one of the following options:

Receive notifications about information and event scheduling for Jack

There are no events scheduled. You can still show your support by sending flowers directly to the family, or planting a memorial tree in memory of Jack Allison Gray.
Plant a Tree

We encourage you to share your most beloved memories of Jack here, so that the family and other loved ones can always see it. You can upload cherished photographs, or share your favorite stories, and can even comment on those shared by others.

Kevin and Julie Honeycutt and family

Posted Jun 09, 2020 at 07:27pm
Jack was my Jet Stream Plastics rep for many years. Eternally enegetic, Jack always had a smile on his face, which was contagious to those around him. I am blessed by my friendship with him, blessed to have almost all of his prints, which I proudly display on my walls. My heartfelt condolences go out to his family and friends. Heaven gained another Angel with his passing.
Comment Share
Share via:
SC

Posted Jun 07, 2020 at 12:03pm
My favorite memories of Jack was going to LJs after Razorback games with Jack, Barbara, Mom & Dad (Virgil & Ruth Alexander). Also when I would come home to visit when living in Dallas we would all go to dinner and Jack was our designated driver. We would also go to Dawn Hill for happy hour and karaoke. Loved hearing Jack tell his jokes and loved hearing him get up and sing country songs. I have hundreds of memories of him. Loved hanging out at Grand Lake on summer holidays on pontoon boat. Jack and Barbara were a big part of my life and I miss them very much. Deepest sympathies to all the family for their loss. Love, Susan Alexander Case
Comment Share
Share via:
M 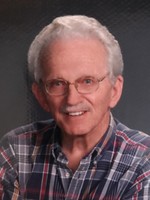