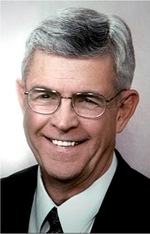 Herbert Lloyd Wight, a member of the Clear Creek Congregation of Jehovah’s Witnesses, finished his earthly course on Tuesday, November 2, 2020. He was 81 years old when his hope to be one of Christ’s resurrected brothers became a reality.
Herb was born in Lawrence County Ohio on July 7, 1939 to Charles and Evelyn Wight. He was baptized on July 22, 1953 at The New World Assembly held at Yankee Stadium, New York City. He married his beloved wife, Gloria, in August of 1960. In 1962, he and Gloria received their assignment to serve as full-time Kingdom Publishers in Blytheville, AR and they raised their 3 children there. Br. Wight served as an elder from 1960 until his death. As such, he was privileged to serve his spiritual family as a Shepherd, Teacher and Speaker locally, as well as on a Circuit and Regional Level. He studied the Bible with more than 100 individuals over the years, many of whom were moved to dedicate their lives to Jehovah God.
Br. Wight was tireless in his service to Jehovah God and people of all backgrounds were drawn to his warmth. He was never too busy to spend time with those who reached out to him. The qualities that especially endeared us to him were his absolute love for and faith in Jehovah God, as well as his staunch adherence to and respect for God’s righteous laws and principles.
Br. Wight is survived by his wife, Gloria, his three children – Elizabeth (her husband Terry Carpenter), Amy (her husband Mark Cook) and Scott Wight; his grandchildren, Wade Carpenter (his wife Katie), TJ Carpenter (his wife Melanie), Ross Carpenter (his wife Katie), Taylor Carpenter, Claire and Sheldon Wight and one great grandson, Jonah Allen Carpenter, his brother Doug Wight, his sister, Jacquie Buchanan, extended family, as well as many spiritual children.
A Memorial Service will be held via Zoom Conference on November 21, 2020 at 2 p.m., Wade Carpenter officiating. In lieu of flowers please send charitable donations to the Worldwide Work of Jehovah's Witnesses (JW.ORG).

We will miss our dear Herb very much. Yet, we rejoice that he now resides in his everlasting dwelling place.