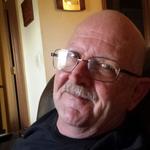 On Friday, July 3, 2020, Gary Wayne Herrin passed away at his home in Bentonville, Arkansas, at the age of 61. Gary was born on September 23, 1958 in Parsons, Kansas, to the parents of Roy and Geneva (Shepherd) Herrin.
He graduated from Uniontown High School, Uniontown Kansas in 1976. He married Janie Cupp in July 1989. They later divorced. As the youngest of three children, he enjoyed playing with his nieces and nephews during their growing up years; as well as his two step-daughters. Gary moved from Kansas to Arkansas where he made many friends at work and in Northwest Arkansas.
Gary was preceded in death by his parents. He is survived by his brother, Kenny (Devona) Herrin, his sister Janet (George) Meiwes, his step-daughters Tanya (Marty) Manwiller and Camie Neal, seven step-grandchildren, seven niece and nephews, and several great nieces and nephews and cousins.
Memorial services will be held Friday, June 10 at 6 pm at Westfield Chapel in Sprindale, Arkansas. Burial will be held in Kansas at a later date.