To share your memory on the wall of Eugene Veenhuis, sign in using one of the following options:

Gene was born on January 23, 1944 in Hutchinson, Minnesota. His parents, Herman and Norma, were farmers and grew peas and corn for Green Giant. Gene... Read More
Eugene Herman Veenhuis, 75, of Fayetteville, Arkansas passed away on October 10, 2019.

Gene was born on January 23, 1944 in Hutchinson, Minnesota. His parents, Herman and Norma, were farmers and grew peas and corn for Green Giant. Gene also had an older sister, Jerene. He attended elementary school in a one-room school house. In those days, an older woman in town would prepare a big pot of soup at home and bring it to the school so the kids could have a hot meal during the cold winter months. It was during this time, because Gene could hear what the other kids were learning in all the grades around him, he accelerated, and was able to skip the second grade.

At one point during his rowdy teens years, the local sheriff pulled him aside and advised him to “straighten up,” noted his potential and suggested the military. Gene wisely followed his advice. After he graduated from high school, at 17 his parents granted him permission to join the Marines.

Gene spoke of his time in the Marines with deep respect. The hard work tested him and his successes burnished his confidence. He was stationed in Okinawa, which location brought to life the courage and sacrifice of his Marine brothers during WWII. Gene was honorably discharged having earned the highest honor of Expert Marksman.

Gene returned home and earned an undergraduate degree in Accounting from the University of Minnesota. After graduating, he jumped in his 2-seater convertible with his dog and drove to California, enrolling in Stanford Law School.

After earning his JD, Gene moved to Los Angeles and started his career in tax law. He purchased a home on Carbon Beach in Malibu and began living his American Dream. He loved being on the beach with friends. He told stories of meeting all kinds of people, some of whom became lifelong friends and business partners. He even met Paul Newman who would occasionally play with Gene’s little dog while enjoying the beach.

At one point, Gene took a vacation – City Slicker’s style – and his life changed forever. He purchased a ranch in Montana, and officially became a cattle rancher. He ran the ranch from horseback, equipped with chaps, cowboy hat and boots. He would fly back and forth between Montana and Los Angeles, continuing his practice of law. Eventually, he would rise to managing partner and the head of the tax department – living his dream.

During this time, Gene married and had two beautiful daughters, Montana and Gabrielle whom he loved dearly. He enjoyed his cabin in Wofford Heights, ran marathons, skied, and enjoyed being with his friends and family, endearing himself with his care and sense of humor.
Eventually illness brought his family to Fayetteville, Arkansas, where his family cared for him until his passing. During that time, his fight to live was admirable, and his smiles became cherished gifts to his family as well as the nursing staff. As more than one nurse would say, “His smiles light up the room.”
He is a very dearly loved man, and truly missed.
Blessed be his memory.

Receive notifications about information and event scheduling for Eugene

There are no events scheduled. You can still show your support by sending flowers directly to the family, or planting a memorial tree in memory of Eugene Herman Veenhuis.
Plant a Tree

We encourage you to share your most beloved memories of Eugene here, so that the family and other loved ones can always see it. You can upload cherished photographs, or share your favorite stories, and can even comment on those shared by others.

Posted Nov 07, 2019 at 04:58am
I first met my friend and former colleague Gene Veenhuis when I worked at Mitchell Silberberg & Knupp. During that time, my then boyfriend and Gene's dear friend Hayward Kaiser and I would double-date with Gene. I never once saw this endearingly wonderful guy without a smile. And it was infectious. Everyone who knew Gene loved him. He had this innate bond with nature that defined his life. He was highly-respected among his peers and colleagues and was more than well-liked. Those of us who were graced by his goodness, his sense of humor, and his compassion for others have been forever blessed. Gene will be greatly missed and fondly remembered. My deepest condolences to his devoted family and friends. RIP Gene Veenhuis
Comment Share
Share via:
RV

Susi, I just saw your post, and thank you. Your words are a beautiful tribute for Gene. It is such an honor to read how others saw Gene, and to see how much his life touched the lives of others. Thank you so much for sharing this. And, I will share this with his daughters, so they can always treasure how wonderful their father was. Gratefully, Robin Veenhuis, Gene's wife 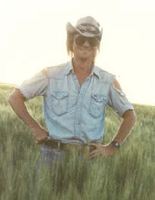