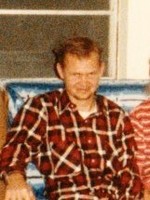 Donald Lee Bowlin was born in Springdale, AR on February 25, 1958 and left us on Monday October 19, 2020.
Donald is survived by one daughter, Stephanie Bowlin of Rogers, AR, two sisters, Phyllis Ingram of Springdale, AR and Eunice Rieff of Elkins, AR, five grand-children, Cadence, Sierra, Khyler, Brielle, and Winter, and his closest friend and companion Renee Hunter. He had many other family members and friends who loved him very much.
He is preceded in death by his father, Gordan Lee Bowlin, mother, Nora Mae Bowlin, and one son, Bradley Bowlin.
He had many hobbies which included riding his bike, arts and crafts, fixing lawn mowers, playing bingo and singing in church. He always enjoyed spending time with the people he loved.
He will be cremated at Westfield Chapel funeral home. We will be having a celebration of his life, which will be announced at a later time.