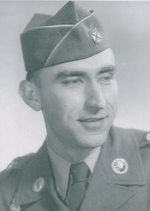 Derrel Arnold Beard , age 95, of Springdale, took his place in heaven after 95 years of serving God, Country, and Family. He began anticipating this trip a few weeks back when he suddenly decided that he could walk again however his body was too weak but God remained the strength of his heart.

Born on August 23, 1925, in Lowell, Arkansas Derrel was the end of an era. He was the
last of his siblings; Richard Willis, John Truman, Charles Wade, and Bobby Lee(entered
eternity at birth). We knew that he was anticipating a reunion with them when he
dreamed out loud of the good ole’ days during his final weeks.

His mother and father Beulah Lee and Grover Stevenson concluded their time on earth
over 40 years ago. They were all due a family reunion and we know that they had one in
the presence of our Lord
No eye has seen, no ear has heard and no mind has imagined what God has prepared
for those who love him. 1 Corinthians 2:9

Derrel was survived by his darling wife Anna Ruth they experienced 64 years of marital
bliss. Theirs was the truest form of love and it has guided generations. It was only
outweighed by his love of Jesus Christ and they worked in tandem to build a Christcentered
home. He prayed daily that his children and grandchildren would walk by faith
and he supported and loved them dearly.
Derrel and Ruth were blessed with four children; Pam, Vicki, Michael, and Larry
Kevin(entered eternity at birth). They acquired two more sons by marriage; Robert and,
Jon. Derrel tended to treat all of his children with an abundance of love and kindness.
There was very little that would rile him up but he did keep a close eye on the boys that
had eyes for his girls.

Robert recalls a time when he picked Pam up from her house and then later she drove
his truck home and it was spotted sitting outside by Derrel in the early morning hours.
They weren’t married yet so you can imagine a gentleman like Derrel’s reaction to such
a discrepancy. Once the situation had been cleared up Robert made sure to engage in
some one-sided banter with him. “Derrel, do you think that you could be a little quieter in
the morning? I can’t sleep with all that racket.” There was never a harsh word between
the two of them but rather adoration and respect for 35 years.

Derrel owned a petrol station back in the 1960s and ’70s. It was common practice for
his patrons to have their gas pumped by an attendant and a tab to put their gas on.
Vicki loved being at the station. She knew that this visit meant a Coke, her choice of
candy, and a hug from daddy. At around 2 o’clock every day Derrel would make his way
home for lunch and a “nappy-pooh”. Pam remembers looking forward to crawling into
his arms and napping with him. He held the girl's hands for what felt like a very little
while but he will hold their hearts forever and they will cherish these precious moments.
Derrel never saw much need for spending large sums of money unless he was taking
his wife and children on a vacation to the beach or Disney World. He loved watching his
family enjoy themselves.

He was a simple man. His wardrobe consisted of a white button-up and slacks for every
day, coveralls for work, a suit for Sundies(that’s Sunday if you’re not from ’round here),
and flannel sleepers. He was dapper in whatever he was sporting and smelled of
aftershave, Listerine, and, on some days cut grass and gasoline. He didn’t have much
hair to speak of but what he did have was combed over with care every day with an old
yellow comb. It sat uniform by his sink along with his other morning rituals. All things
that attributed to the consistency of the life that he lived.

When I was around four years old, I scanned his head in disbelief and then informed
him that it would be really easy to find ticks on his head. This was a perk if you loved to
play up around the old pond as we did. He laughed at the genuine proclamation of his
favorite(only) granddaughter.

Derrel never wanted to cause much fuss. Michael remembered cleaning a shed with
him when he was a child. In the midst of transferring a box. Derrel dropped it and
walked briskly out of the shed. Only to return and resume work without any explanation.
When Michael asked him about his mystery exit he said that a mouse had crawled up
his pant leg and that he needed to remove it. That mouse chose the wrong pant leg and
received the royal flush. That’s right, he sent it swirling and got back to work.

Derrel loved visiting with his grandchildren Robbie, Ally and, Kevin along with his greatgrandchildren;
Ryan, Drew, LolaRose and, Bear. He was blessed with two additional
grandchildren by marriage; Cindy and Stephen. Whether telling stories, working in the
yard, changing the oil on the old red Ford, or enjoying some of Mammaw’s sweet treats
Derrel always wanted to be surrounded by his grandchildren.

Kevin loved spending his summers visiting with Pappaw and Mammaw and he
remembers walks that they went on and talks that they had. Kevin always enjoyed
pulling up a bucket to pull some weeds from the flowerbeds with Pappaw.
It was important to receive Pappaw’s approval and this meant a prior discussion before
betrothing any of his girls. Stephen remembers being relieved to hear that Derrel
approved of his asking Ally to marry him. After all, another boy was denied the
sentiment a few years earlier. Joining this family meant that you became part of an inner
circle that would forever be prayed over and worried about my Pappaw.

Derrel was a proud member of the United States Army. He obtained a corporal rank and
served in the Korean War. He was able to recite his rifle number until the day that he
moved on to the Lord’s Army. A soldier never forgets his rifle number. “ US 54 063 929”
he would say.

Derrel recalled a time when he was on patrol while the men were camping in a field out
of sight when he saw trucks rapidly approaching the unsuspecting soldiers. When he
realized that the trucks were unaware of them and only moments from running through
their camp, he rushed to redirect them without anyone ever knowing that the incident
had taken place or of the lives that he had saved. It would be 50 years before he would
share that memory.

He was a humble man who never asked for any recognition except for showing off his
family party tricks. Derrel was gifted with the ability to kick his butt and he was keen on
teaching his grandson Robbie how to do it. The family would howl with laughter as the
two of them would jump sky high to kick their own fannies. Have you tried yet?

Pappaw’s list of attributes didn’t end with kicking his own butt though. He and his son
Michael along with his grandson Robbie all inherited and mastered the art of wiggling
their ears. One gift that was attempted regularly by myself and others without success.
His smile and laughter were contagious. If Pappaw laughed then we all did.

Derrel’s childhood was shaped by the great depression. After four major wars and 22
US presidencies, Derrel had seen enough. As Pappaw’s breath began to slow I partly
expected him to rise and tell us all the secrets of a life well-lived. I realize though that he
shared those secrets every day through his daily Bible study, his love for his family,
service to his country, and work ethic.

My heart aches to write the final pieces of this obituary because that means that I have
concluded my attempt to thoroughly describe an indescribable man. He was a gentle
soul and he will never be forgotten. His legacy will live on through those that loved him.
Blessed are those who trust in the Lord and have made the Lord their hope and
confidence. They are like trees planted along a riverbank, with roots that reach deep
into the water. Such trees are not bothered by the heat or worried by the long months of
drought. Their leaves stay green, and they never stop producing fruit.
Jeremiah 17:7-8

Written by a girl who has been inspired every day by the life that this very special man
lived.