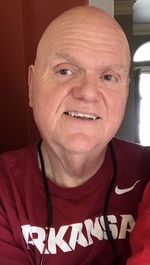 Chuck was born in Little Rock, AR, to Elsie “Molly” and Carl Kumpe on July 23, 1953. He was a graduate of University of Arkansas Little Rock with a Bachelor of Arts Degree in History and was a member of the Kappa Sigma Fraternity. He married Barbara Arlene Grubbs of North Little Rock, AR, on April 4, 1981. He enjoyed his work in retail sales and retired in 2015.

He is preceded in death by his parents. He is survived by his wife, Barbara, of 40 years, his daughter Courtney, son Chad and wife Megan, his niece Cindy and his grandchildren Blake, Riley, Kate, and Callen. He is also survived by his sister Judy and husband, Wayne Smith, along with many extended family members whom he loved very much. He will also leave behind his grand-dogs Maya, Jack, and Blue.

Affectionately known as Grandpa, Chuck dearly loved his grandchildren, and enjoyed spending time with them. He loved fishing with his son, Chad, and watching as many movies as possible. He shared a love of music with his daughter, Courtney, and they attended many concerts over the years. He was an avid University of Arkansas Razorbacks sports fan. He attended as many games as he could and shared his love of the Razorbacks with anyone who would listen.

A drop-in Visitation will be held Sunday, January 24th at Westfield Chapel Funeral Home in Springdale, AR, from 2-4 pm. Because he loved to call those Hogs, please join our family in wearing Razorback attire or Razorback red for the visitation.

In lieu of flowers, memorials may be made to Hub of Hope NWA at www.hubofhope.org.

The Kumpe Family would also like to extend their sincere gratitude to the COVID-19 Team including the doctors, nurses, and support staff at Mercy Hospital in Rogers, AR, for the compassionate care they gave our beloved Chuck.