To share your memory on the wall of Carol Schriver, sign in using one of the following options:

Print
Carol Davis Schriver, 76, of Springdale, passed away on March 13, 2020 after a swift battle with an aggressive cancer. She was the widow of her beloved Byron Schriver, Jr. They shared 49 years of marriage together.

Born in Macon, Georg... Read More
Carol Davis Schriver, 76, of Springdale, passed away on March 13, 2020 after a swift battle with an aggressive cancer. She was the widow of her beloved Byron Schriver, Jr. They shared 49 years of marriage together.

Born in Macon, Georgia, Carol was the daughter of Helen and Kenneth Addison Davis and the middle of three beautiful sisters. She graduated from Americus High School and tap danced her way to Miss Sumter County in 1961, a hobby she enjoyed even into her 70’s. After graduating from Mercer College in Macon, GA, Carol bravely rode a bus to New York City where she worked for AT&T and lived at the Methodist Home for Girls. She eventually returned to Atlanta to teach high school Spanish, where she met and married Byron. They had their three children in Atlanta and moved to Little Rock in 1977. Carol worked hard at making her home a wonderful environment for her family, who were the most important part of her life.

Carol was a member of St. James United Methodist Church from 1977 until she moved to Springdale, AR in 2018 to be closer to her adult children and grandchildren. She enjoyed watching her grandchildren dance and play tennis; following the Arkansas Razorbacks, and any activity that involved family and friends. Her pride and joy for the last year has been training and spending time with her English Labrador Retriever puppy, Cherokee “Rose” Schriver. She will be remembered by her positive spirit, engaging personality, her adoring love for her husband and children, and for being the most fun and life-giving “Diddle” to her grandchildren.

Carol is preceded in death by her husband, Byron; her parents, Helen and Kenneth Davis; her sister, Judy Davidson; and her niece, Amy Carter Hawkins.

We look forward to celebrating Carol’s life with a service at St. James United Methodist Church in Little Rock; but due to the current health crisis, the service will take place at a time to be announced at a later date. In lieu of flowers, donations can be made to:

There are no events scheduled. You can still show your support by sending flowers directly to the family, or planting a memorial tree in memory of Carol Davis Schriver.
Plant a Tree

We encourage you to share your most beloved memories of Carol here, so that the family and other loved ones can always see it. You can upload cherished photographs, or share your favorite stories, and can even comment on those shared by others.

Posted Mar 19, 2020 at 01:33am
Allyn, I remember meeting your mom at the tennis matches at HarBer. I thought, ‘what a beautiful lady with the prettiest smile!’ She was so kind and proud of her family! My heart goes out to you and keeping you in my prayers. Much love to you!
Comment Share
Share via:
RM

Posted Mar 17, 2020 at 12:44pm
I still remember the day I met Carol as she and my mom, also a Carol, helped to move Allyn and I in to be roommates and what would be the beginning of a life long friendship. Many years have gone by and even my kids came to know and adore Diddle. There are not better words to describe her than live giving and energetic. We will continue to invest in our precious friendship with Allyn, Aaron, Davis, Carley, and Layton ... they are a huge part of the amazing legacy she left behind. Continued prayers for the entire family for peace and healing.
Comment Share
Share via:
CS

Posted Mar 17, 2020 at 09:32am
Allen, I am so sorry about Carol. At the tennis matches I had the best time visiting with her.
Also I enjoyed her telling me about her dog. Thinking of your family and you, Carole Swope
Comment Share
Share via:
BS

Posted Mar 15, 2020 at 06:34pm
Carol was a wonderful and caring neighbor for too short a time. I cherish the opportunity to help her with some recent home renovations by recommending resources that could handle the job. I always enjoyed seeing Carol outside allowing her beloved Lab Rose to take Carol for a walk. Our neighborhood has lost a truly wonderful lady. May you Rest In Peace.
Comment Share
Share via: 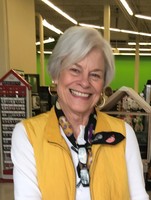