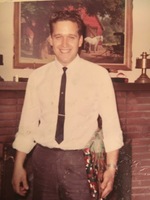 Carl Clements, age 77, of Springdale, passed away On Tuesday, October 20, 2020, Carl was a loving husband, father and grandfather.
Carl was born on May 9, 1943 in Carbon Hill, AL to Conroe and Christine (Nix) Clements. He joined the US
Navy at 18 and served abroad during the Vietnam War. After the war, he visited his uncle in California
where he met his beloved wife, Phyllis. They married on December 30, 1966. They settled down in
Salinas, CA where Carl worked for Firestone. In 1977 they moved their family to Springdale, AR where
Carl started working as an electrician for Easco Tools. He retired in 2008. He was a devout Christian and
served his church in numerous roles.
Carl was a devoted husband, father, and grandfather that was always there for his family. He was always
good for a great dad joke or a funny story from Reader’s Digest . He enjoyed gardening and doing yard
work. During the summer, he would gladly tell you about his plants and share vegetables from his
garden. He was the best person to call when you needed help around the house. He will be
remembered for his heart of gold. You rarely saw him without a smile and a laugh. He always saw the
good in people and never spoke negatively of others.
Carl was preceded in death by his father, Conroe; his mother, Christine; his brother Jim and his in-laws,
Hugh and Annie Pinkley. He is survived by his wife, Phyllis; his three children, Christina (Rob Smith) of
Rogers, AR, Cheryl (Christopher Jones) of Chula Vista, CA, and Jeff Clements of Huntsville, AR. His sisters
Peggy Strickland of Carbon Hill, AL, Betty Pinkley of Huntsville, AL and Patsy Heath of Leeds, AL.
Numerous nieces and nephews. But, his favorite role in life was being Grandpa to Brandon and Brooke
Teague and Spencer Jones.
A memorial service will be held at a future date.