To share your memory on the wall of Billie Adkins, sign in using one of the following options:

To send flowers to the family or plant a tree in memory of Billie Adkins, please visit our Heartfelt Sympathies Store.

Receive notifications about information and event scheduling for Billie

We encourage you to share your most beloved memories of Billie here, so that the family and other loved ones can always see it. You can upload cherished photographs, or share your favorite stories, and can even comment on those shared by others.

Posted Nov 05, 2020 at 10:00pm
Billie was the highlight of my family’s weekly grocery shopping experience at Walmart and Sams Club. His kind smile, stickers, as well as sweet song about stars shining is truly missed in the community. I wear the last sticker he ever gave me, daily on my name badge for work, I serve Veterans and I always loved hearing his service stories. Many prayers to the family. Covering you in love and prayers. Thank you so much for sharing Mr. Billie with us.
Comment Share
Share via:
CM

Posted Oct 29, 2020 at 08:27pm
Billie was a wonderful man! He always had a smile on his face! I worked with Eula at Commercial Bank for years! Wonderful lady &friend ! We were back door neighbor in Leadville! He will be missed! Love & prayers Sharen & Kenny Clune’
Comment Share
Share via:
VT

Posted Oct 28, 2020 at 01:10pm
Mr. Billie will be missed so very much. I've loved seeing him for so many years at the Springdale Walmart and then at Springdale Sam's. Receiving a hug, a short song and a star shaped sticker from him as I entered the store was something I looked forward to - and if he wasn't there I always asked about him. Heaven has truly received a wonderful soul this week. Condolences to the family as I'm sure you will miss him too.
Comment Share
Share via: 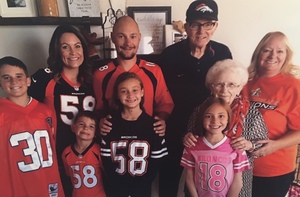 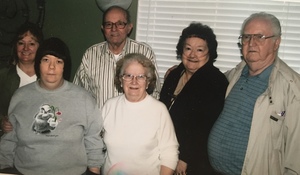 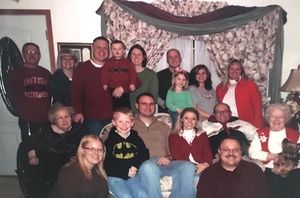