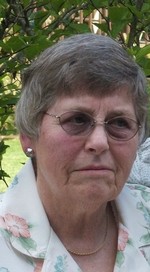 Alma Lilian Harris was born in Laleham, England to T.R. and Irene Simmons. She grew up and started school in Staines during WWII. A lover of books a reading, Alma kept that love all her life.
Her parents were active in the Salvation Army and she participated with them. She remained a devout Christian all her life.
At a Christmas dance in 1955, she met Hugh Harris, who would become her husband, marrying at the Congregational Church on April 27, 1957.
In 1966 she and her husband moved to the U.S. with their three children. After raising children in South Bend, they spent ten years in the Chicago area then moved to Marion, Indiana, where they resided until relocating to Elkins, Arkansas in 2018.
Alma was an enthusiastic member of Hanfield United Methodist Church and was active in the United Methodist Women and in several service groups within the church. Hanfield provided a church home and a community for both Alma and Hugh for many years.
Alma is survived by her husband of 62 years, Hugh R. Harris and her sons Mark (Linda), David, and Peter (Marci) and five grandchildren: Alexandria, Robert, Rebecca, Thomas, and Caleb. Her sister Janet Digby (Andy) resides in England along with numerous other family members, who will miss her dearly.
A memorial service will be held at Hanfield United Methodist Church in Marion, IN on August 3 at 11:00 am.
In lieu of flowers, the family requests donations be made in Alma’s memory to Hanfield United Methodist Church (101 N. 400 East, Marion, IN 46952).